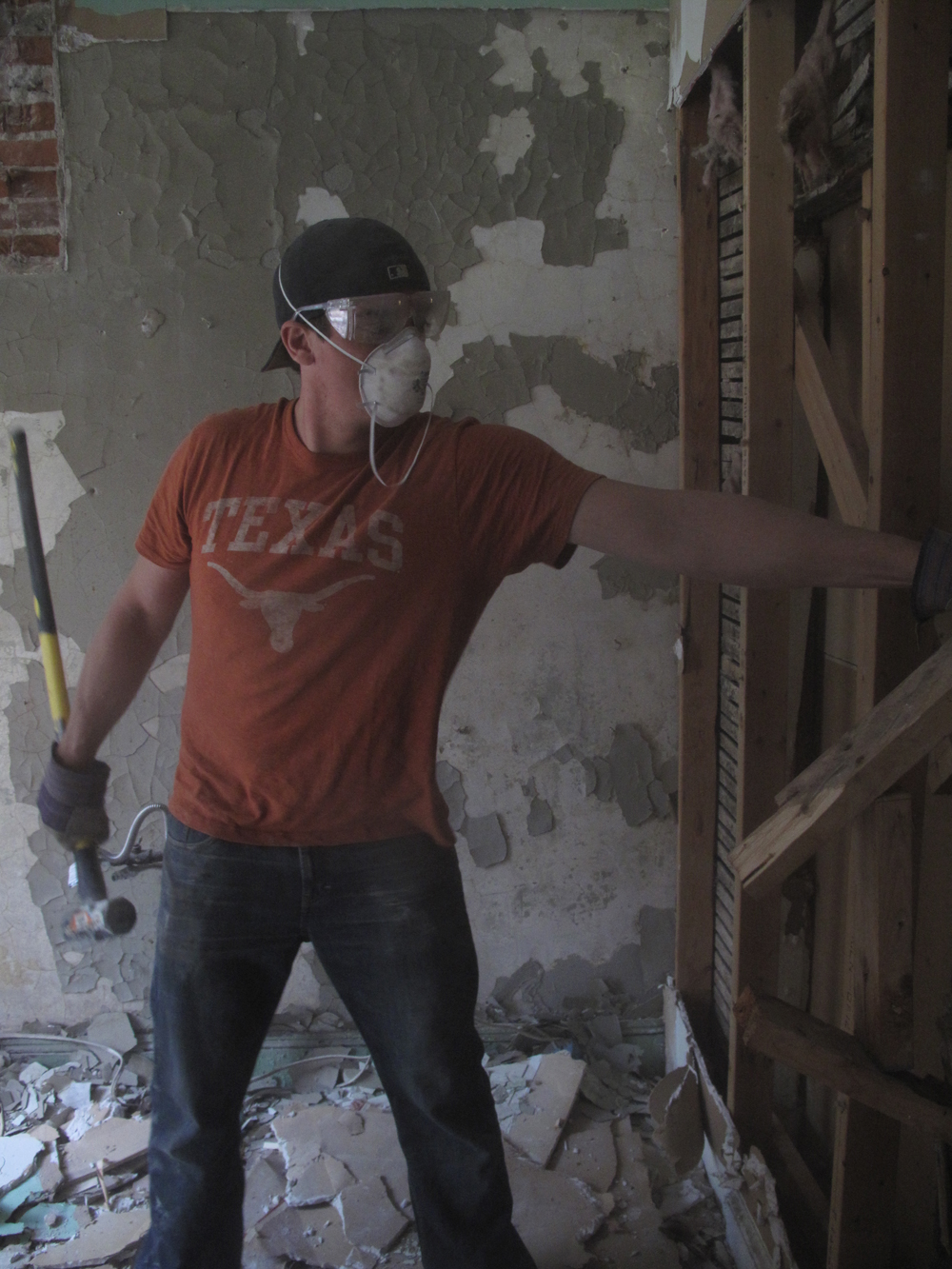 It has happened. The point of no return has been passed. No turning back. Thanks to seven of our friends who turned out on Saturday for 5 hours of smashing fun :) 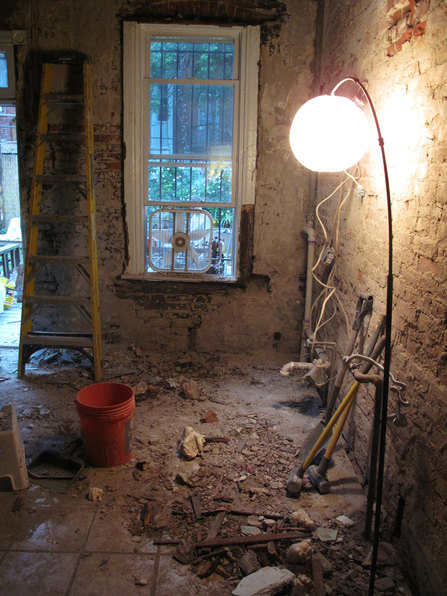 I literary do not remember ever being so physically tired in my life as after Day 1 of demo. I could barely lift my hands – I don’t even know how the dudes fared since they were actually lifting and heaving heavy stuff. I was mostly responsible for taking pictures and misting the air with water to collect dust.

Now for the play-by-play:

Saturday Sergey and I were up pretty early, as we still had to put away a bunch of kitchen stuff, run the last load of dishwasher until July (!), and set everything up – including refreshments – so we can get to work once reinforcements arrived. 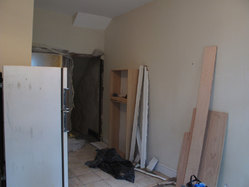 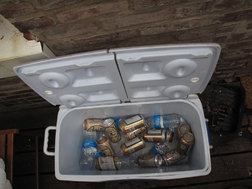 At around noon our first two helpers – Andrew and Pete – arrived, which worked out perfectly to move the fridge and the stove to the living room (both appliances are staying for now) and rip out the cabinets. We briefly entertained the idea of donating the cabinets, but they were so crooked that they really were worthless. 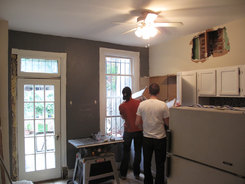 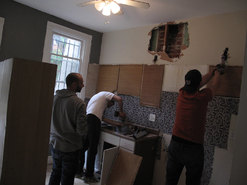 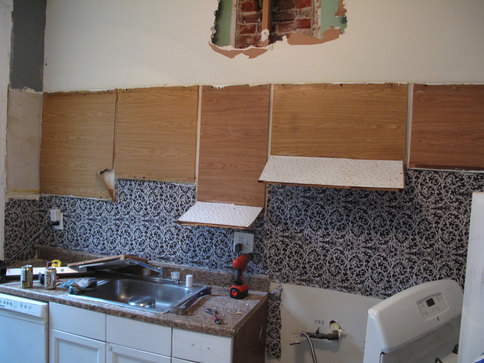 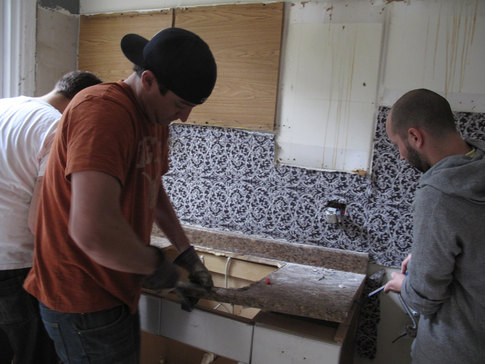 Good thing too, as Patricia got down to business soon after that, using one of the new tools in our arsenal – a sledge hammer. 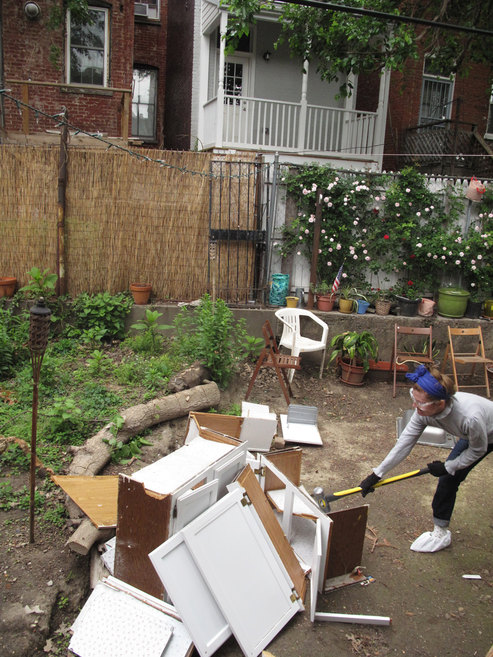 Then Radu, Charlie, Caroline, and Drew joined in to bring down framing, drywall and plaster. Plaster in particular was a huge job, and I am so glad we had a critical mass of people to make it go pretty fast. 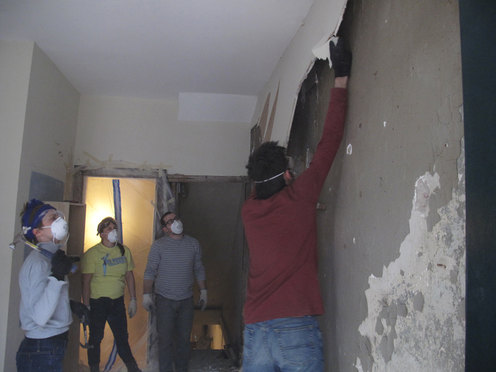 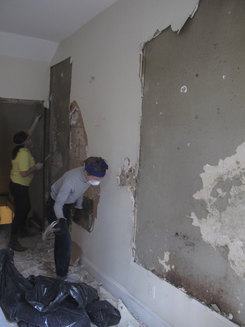 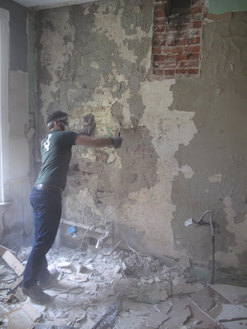 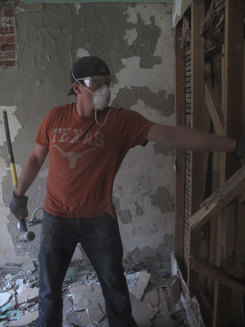 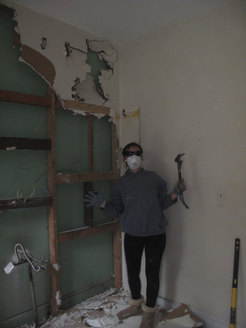 It was also good to switch off between people doing work inside and working outside to breakdown drywall to pack contractor trash bags. 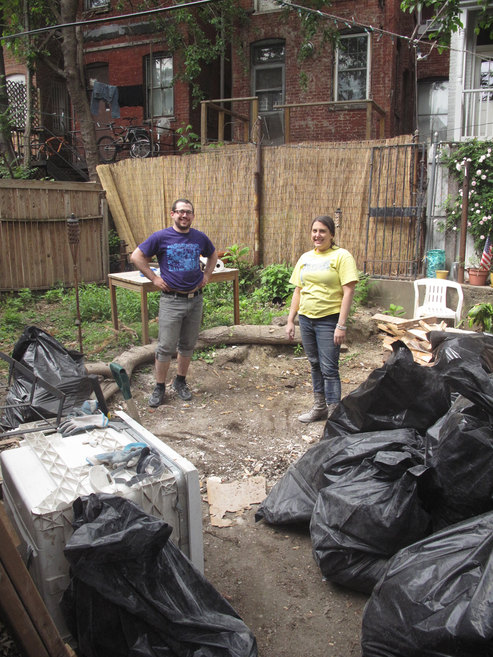 check out our roses in the background, btw. 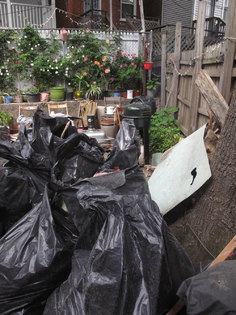 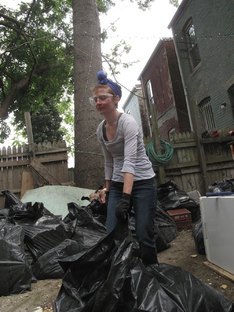 We finished day 1, by almost taking down the half-bath connected to the kitchen. At that point our neighbor Willie also joined us, but i didn’t capture him on camera unfortunately as I was pretty tired by that time.

Day 2, was just me and Sergey, but thankfully we only had about 30% left to do. This is what our morning looked like: 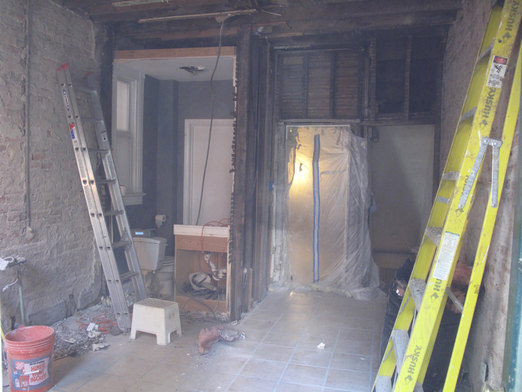 By the way, see the plastic blocking off the dining room entrance? We got this handy zipper from Amazon (when I asked at Home Depot they had no idea what i was talking about) and it really has worked out great. The rest of the house has remained 95% dust free – the other 5% comes from holes in plastic and tracking stuff in and out.

We finished up taking drywall in the bathroom and clearing out debris, and then got down to the floor. 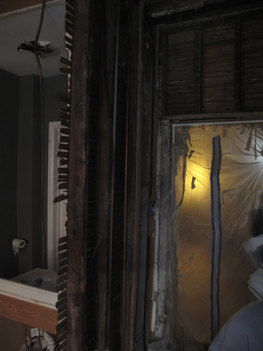 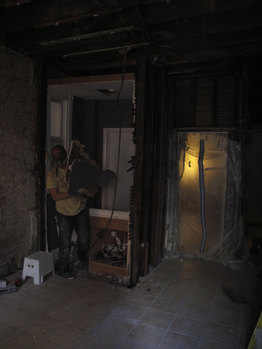 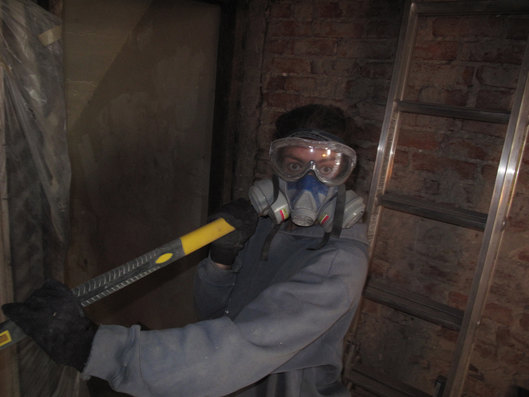 Breaking down tile went pretty easily. In fact Sergey was so fast that I couldn’t quite keep up with trash bags and pick up. Tile is so heavy, and one trash bag can only take a pretty small amount. 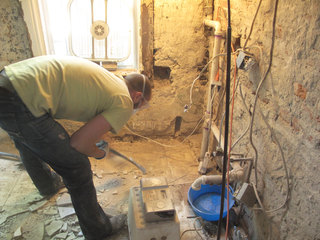 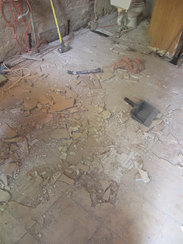 I made a mistake of assuming that getting rid of tile would be the more difficult part and was already excited to do away with plywood layers under the tile. We figured we would need to do that in order to make sure the joists are all in order and do any leveling work that we might need. Plus we were planning to clean up the crawl space downstairs and seal and insulate it, which would be easier with the floor gone. 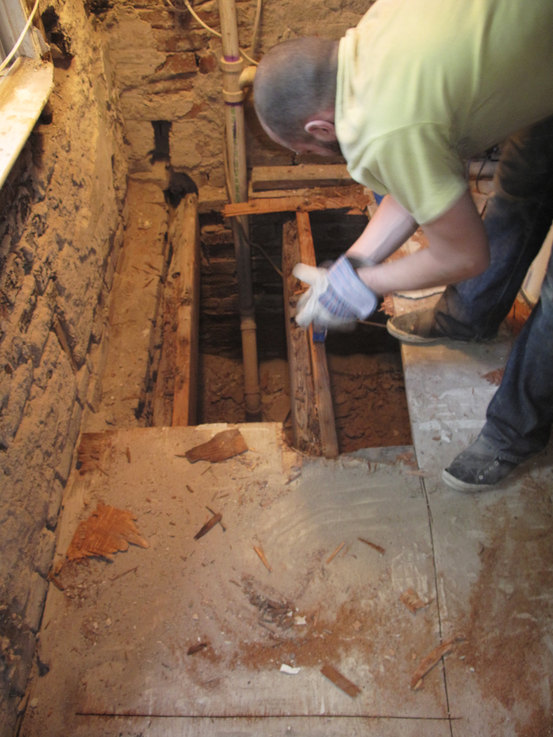 As it turned out though, plywood is pretty difficult to pry off. It was hammered in pretty good.And after getting a small section off after much sweat, we hit on something else under the plywood. Hard wood floor! It appears to run pretty much the length of the kitchen with the exception of area under the cabinet plus a few more inches. 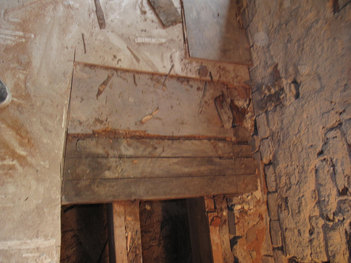 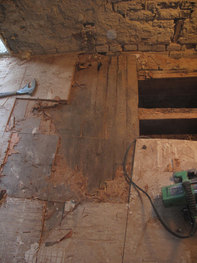 We were planning on tiling the kitchen floor, with heat under it, but now it looks like we might have to reconsider. We will see what kind of condition the rest of the wood is in – so far it has been pretty good. but as i mentioned prying off plywood has been more of a task than i expected.

so demo continues on…