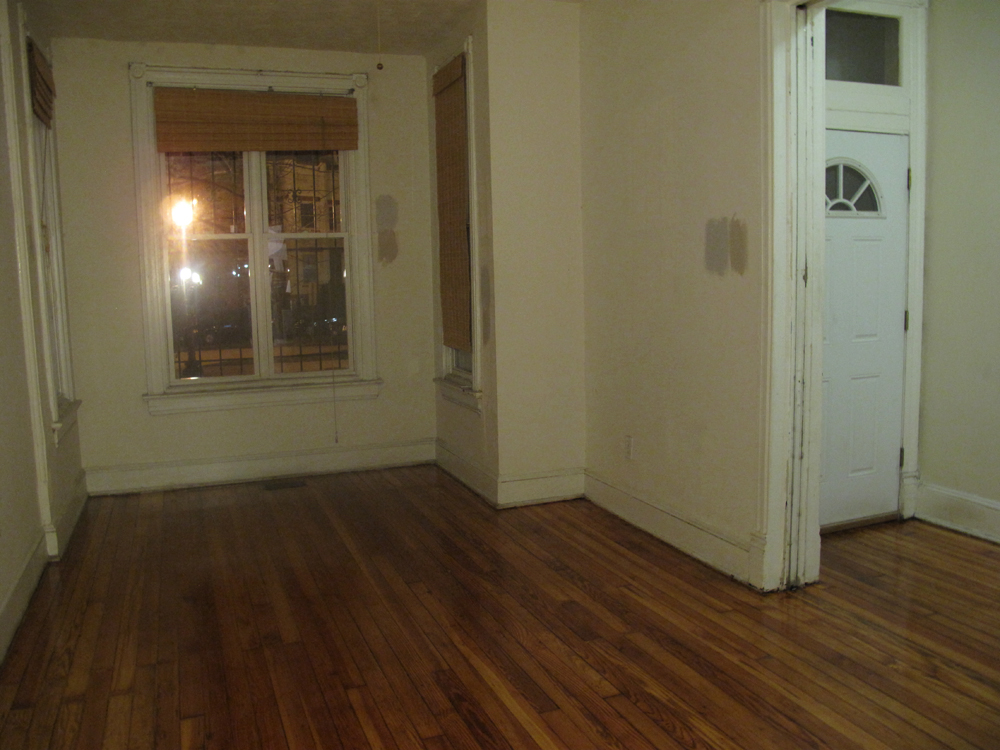 The floors are done! We got back into town Wednesday night after spending New Years with Sergey’s parents in Connecticut. Pleasant surprise – the smell was not bad, actually non-existent pretty much. And of course the floors look shiny and new. 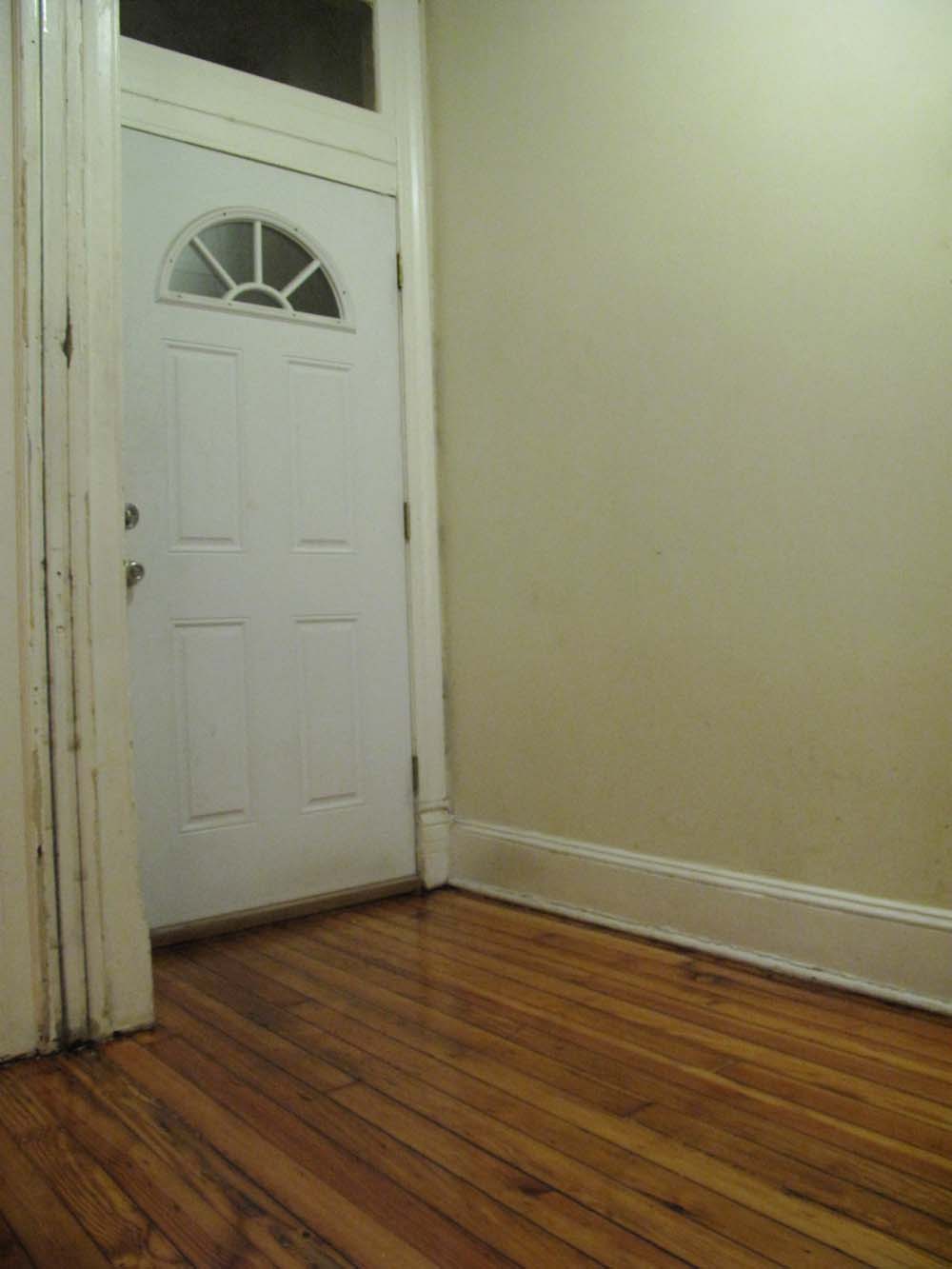 We had sourced three bids to re-do the floors. We went with the least expensive option, which still amounted to just over $2K for the living room, dining room, hallways, stairs and a small bedroom upstairs. We decided not to refinish the master and the other bedroom for now, because we are planning to adjust the layout, including adding another bathroom at some point (not now). That, and also the fact that we had nowhere to put the furniture if we had done the floors in the whole house.

I snapped a few pictures of contractors starting the work, including sanding, patching and repairing and replacing some of the boards. We had to leave pretty soon after they started work though as it was a smelly and dusty affair. 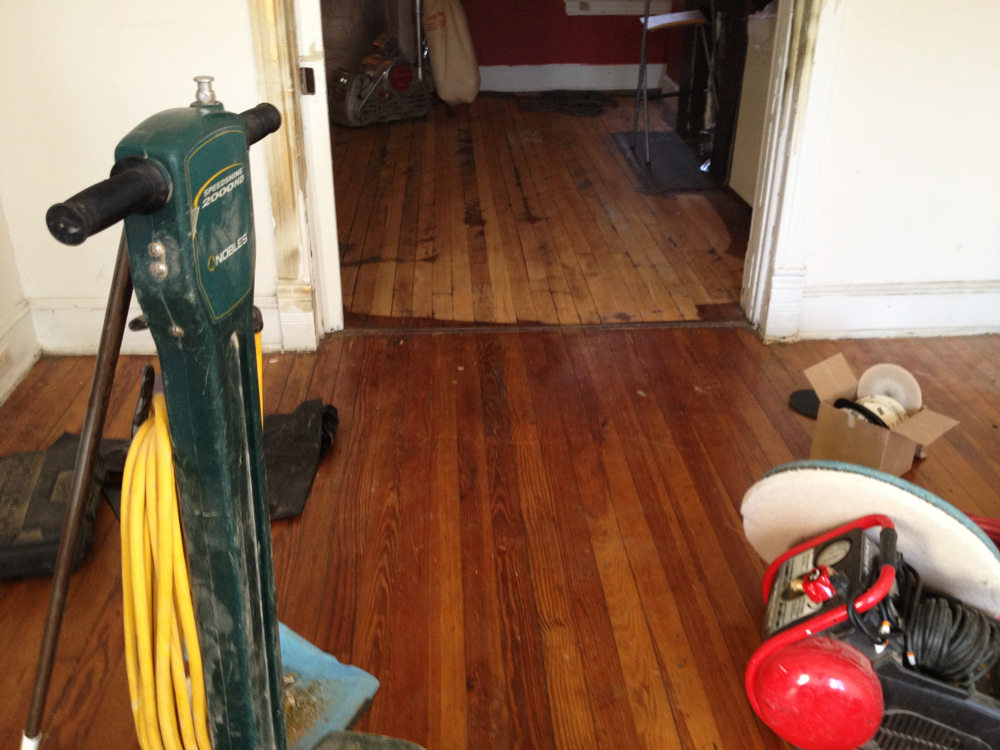 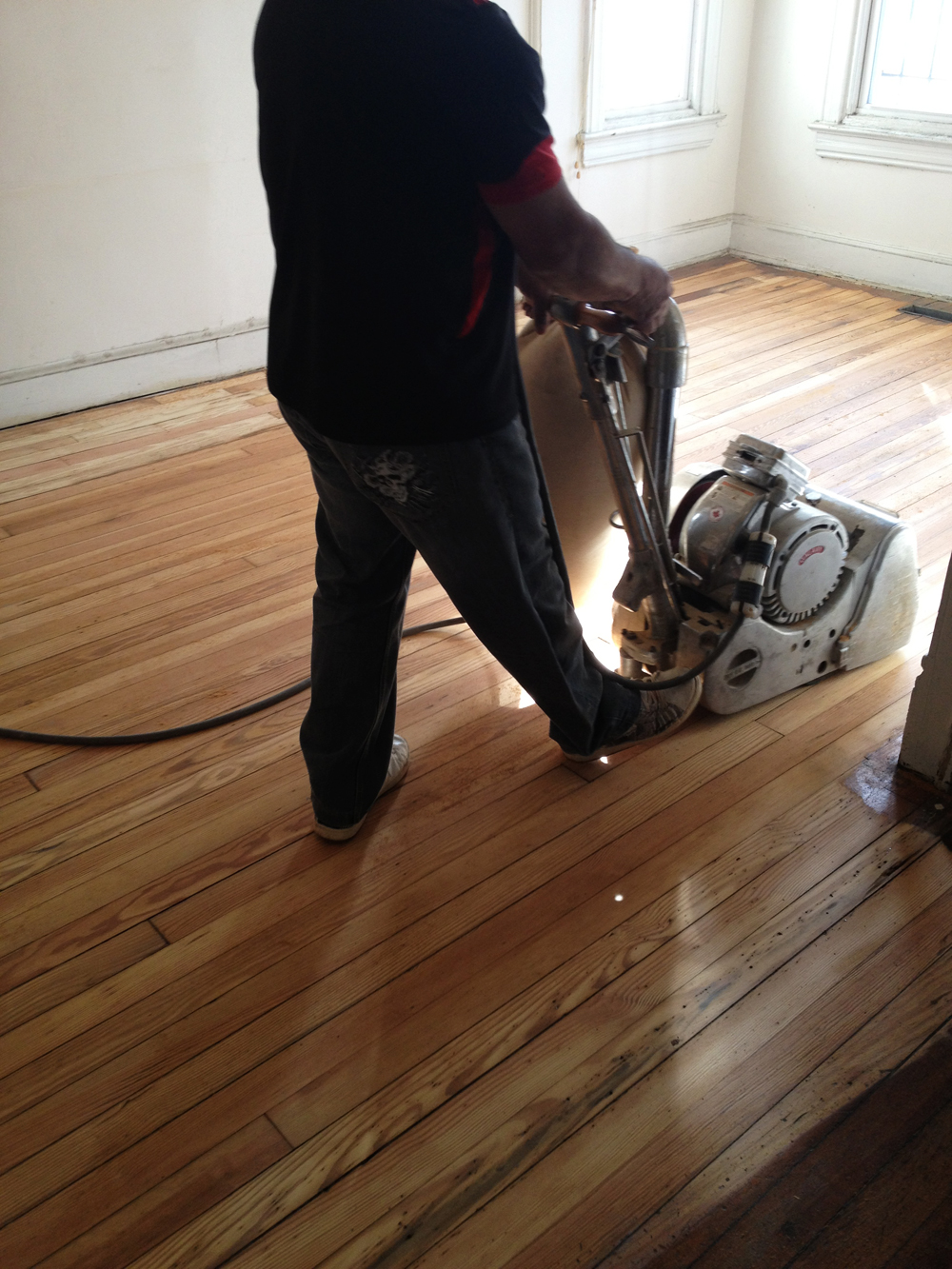 All that wood that we pulled out in the kitchen came in handy to replace and patch up. The small bedroom had a few holes an cracks, and also the hallway by the bathroom needed some love and care. 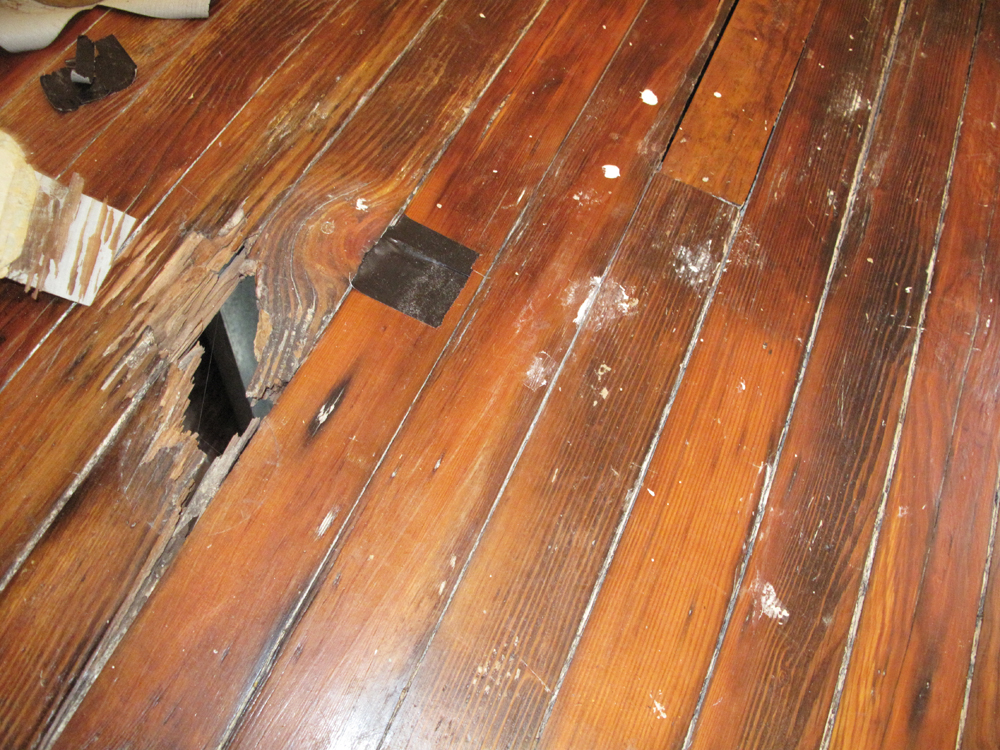 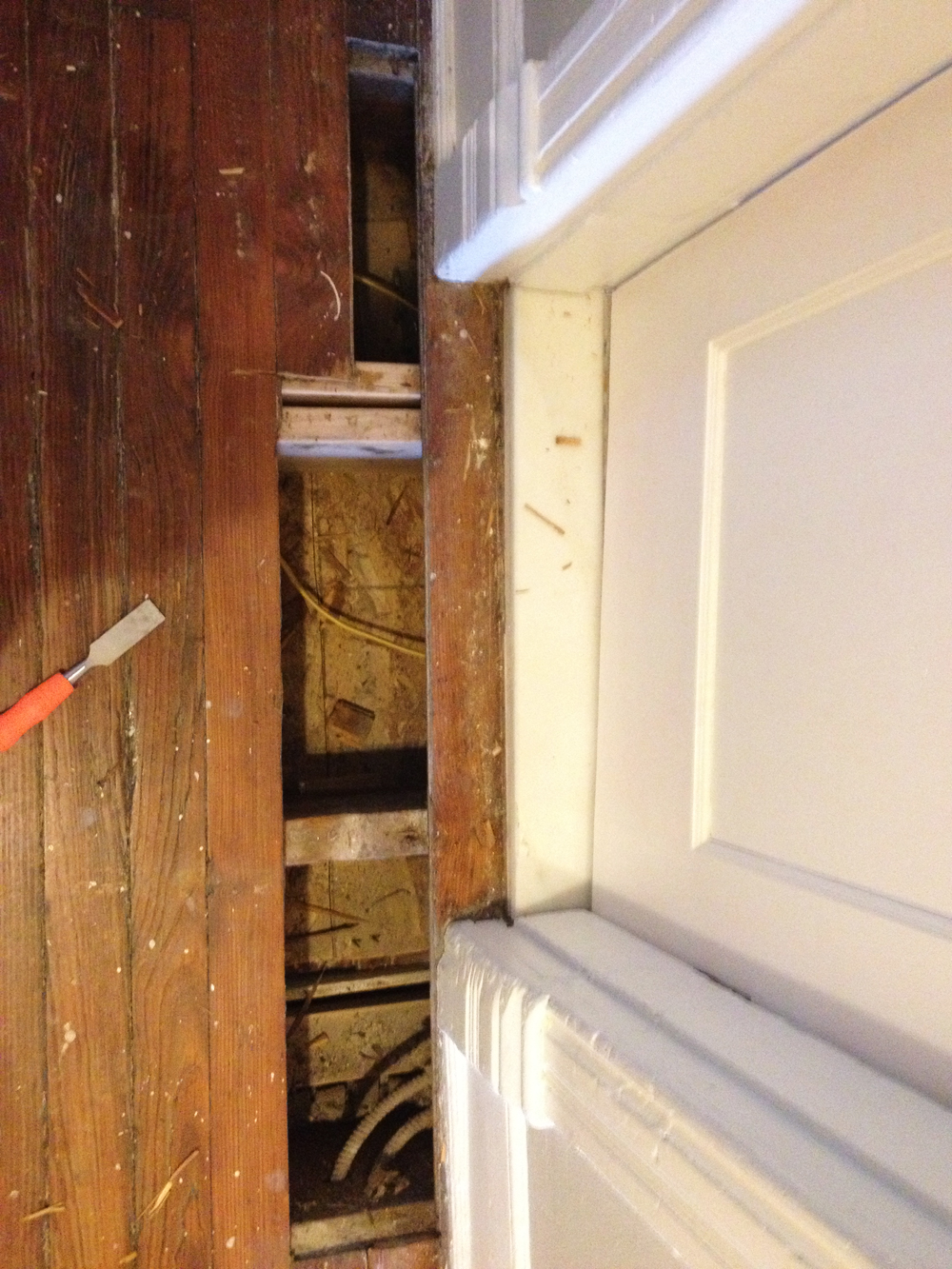 We weren’t there to witness the sealant and poly layers (reportedly, the contractor had done three, although at first he told us that they only do two — so who knows what actually happened.) I would have preferred to do the tung oil finish, rather than regular poly, but our finances are pretty stretched right now and we had to get this done and move on for various reasons. I thought about stain for about a minute, but decided against it, opting to preserve the original color and character of the wood. The finish is glossy, to reflect maximum amount of light.

Here are the results: hallway by the bathroom looking good and like nothing ever happened here (well almost).  The contractors also installed a thresh hold made from our original floorboards. 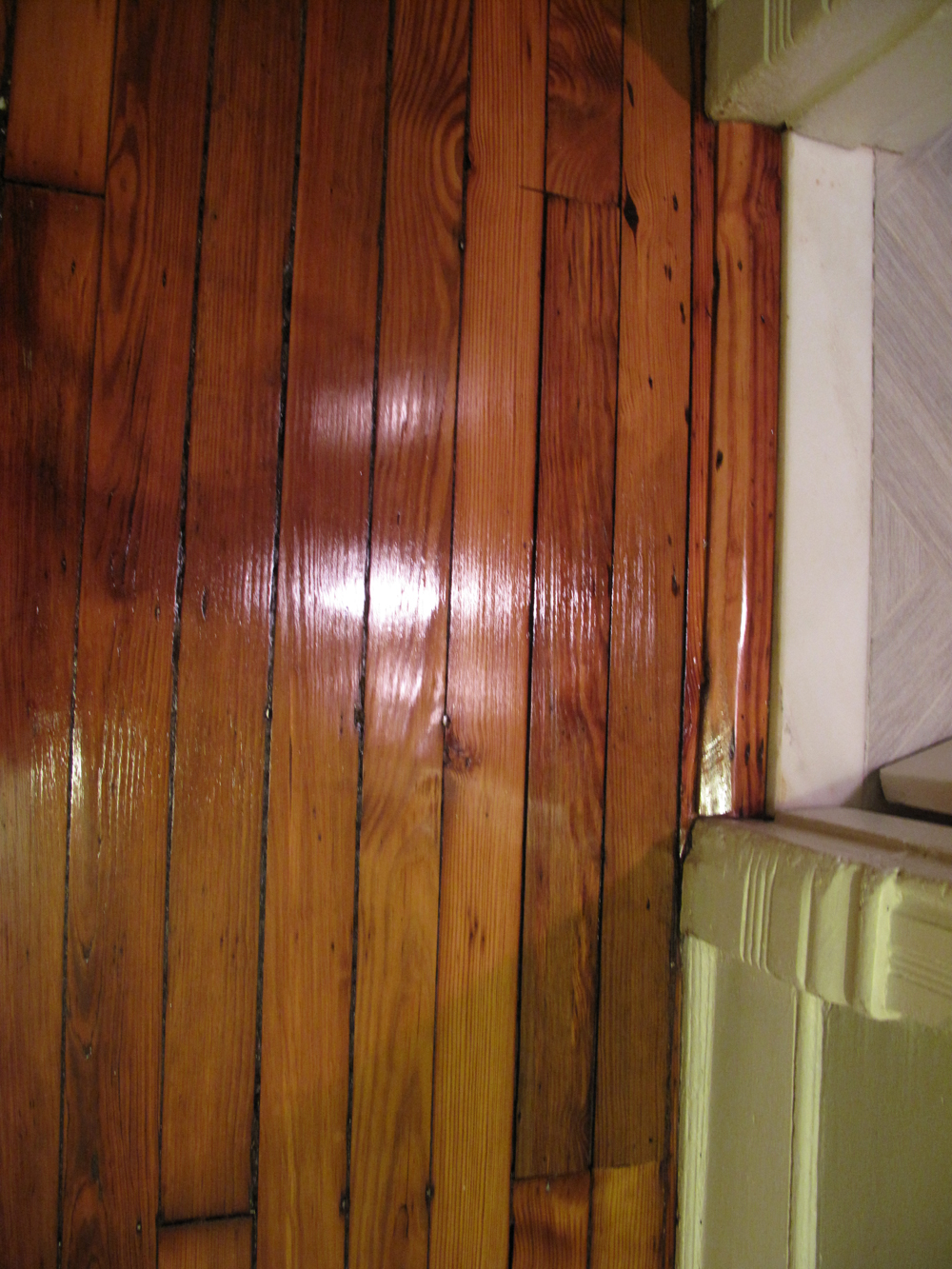 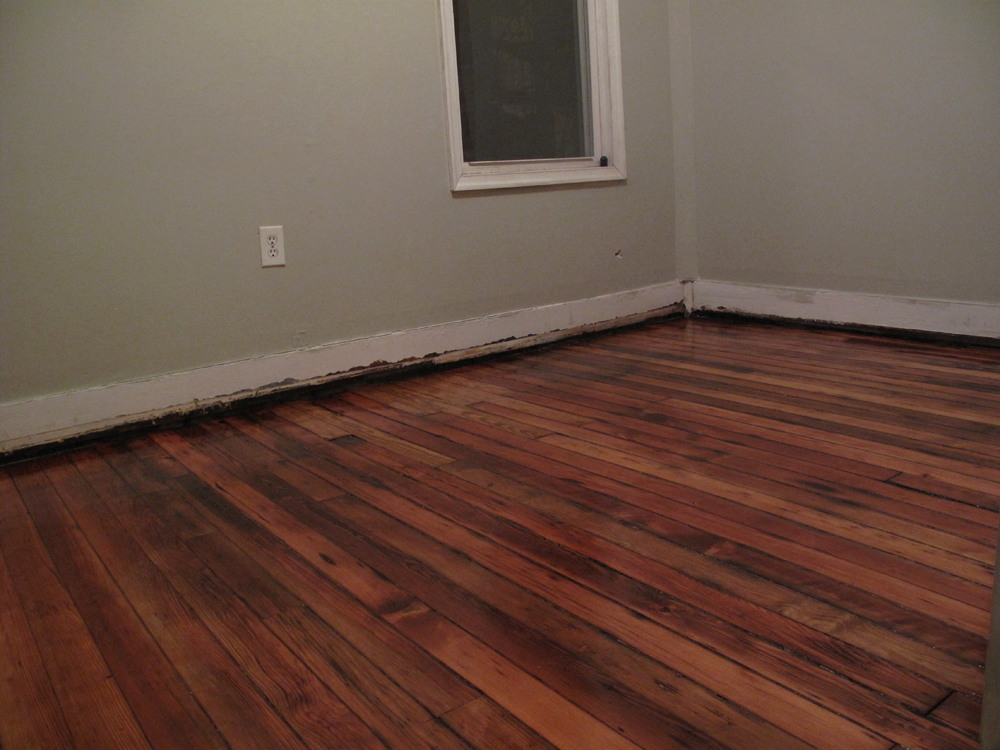 Here’s the entire hallway upstairs. We need much better lighting in here. I am thinking track lighting to give it even illumination. 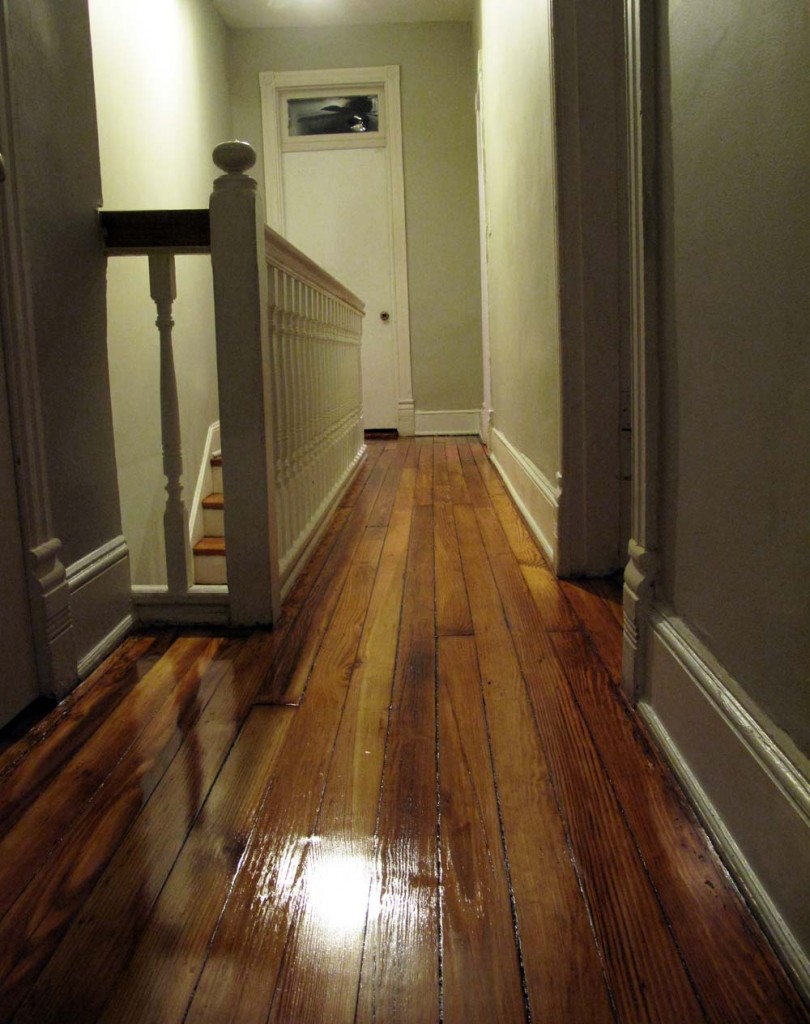 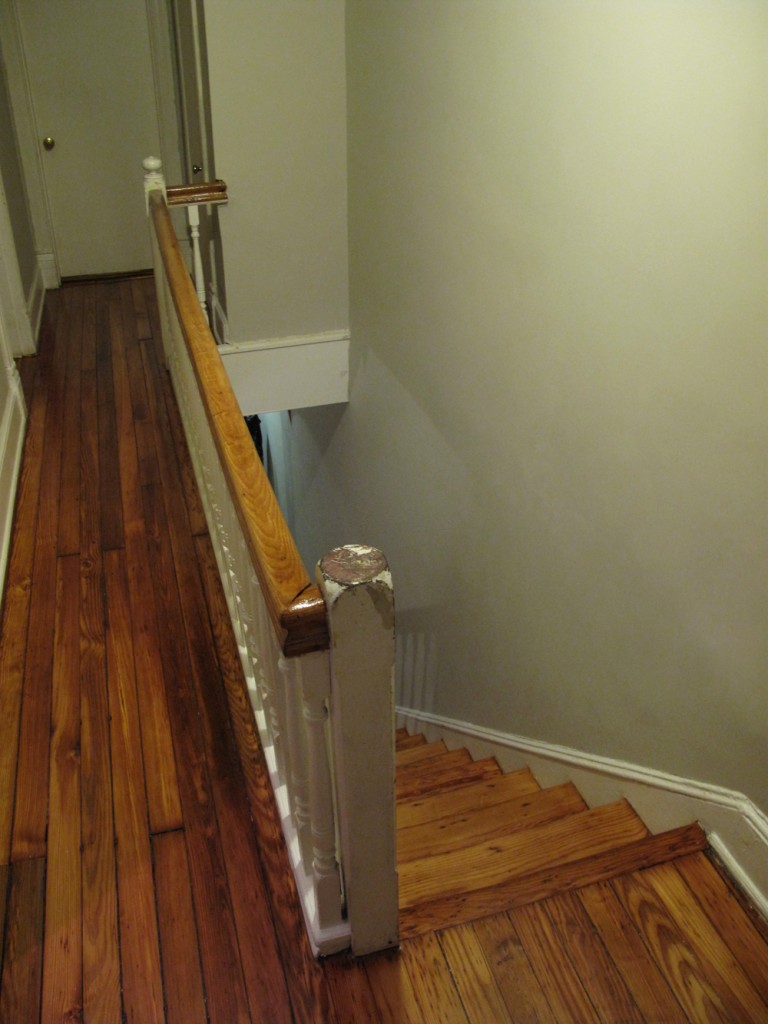 And the steps – which I was worried about because a few of the treads looked like they have seen better days. That turned out to be not a problem. All of the treads were fixed, and one replaced (Thank you to the reader who pointed out that we should do this). We actually got lucky because our contractor sourced the tread from another job where it was an extra. It is slightly lighter than the rest of the treads, but that doesn’t bother me much. 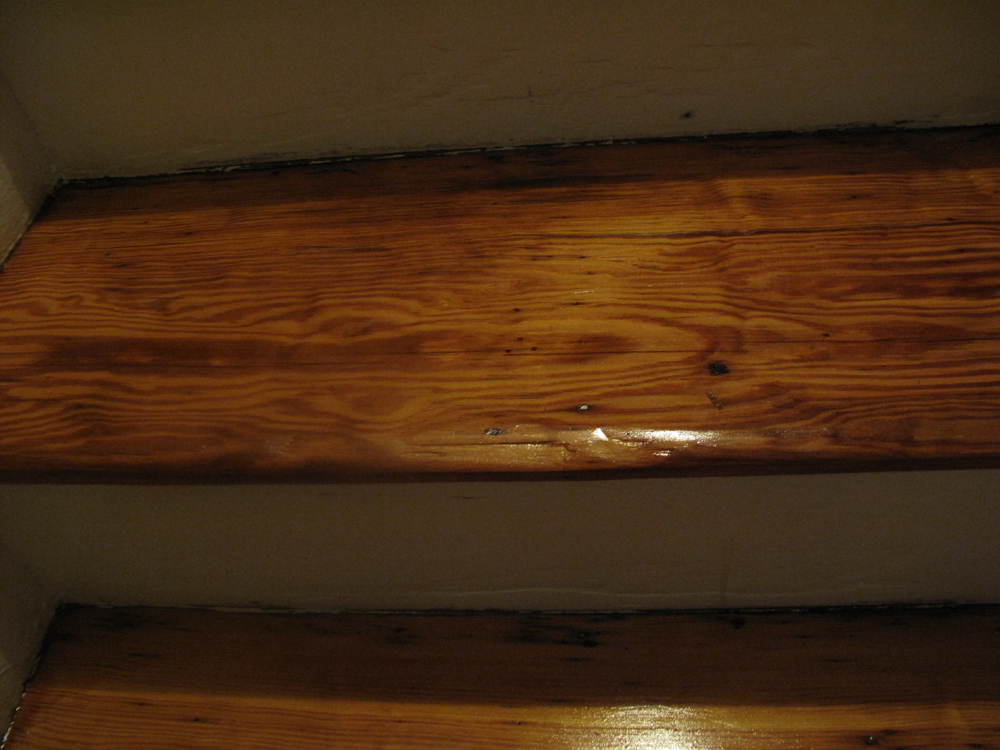 And the two rooms downstairs. We actually have yet to see our floors in daylight, since it is still dark out in the morning and already dark in the evening when we return home. Excited for the weekend to finally get here, so we can admire our awesome new (old)  floor! 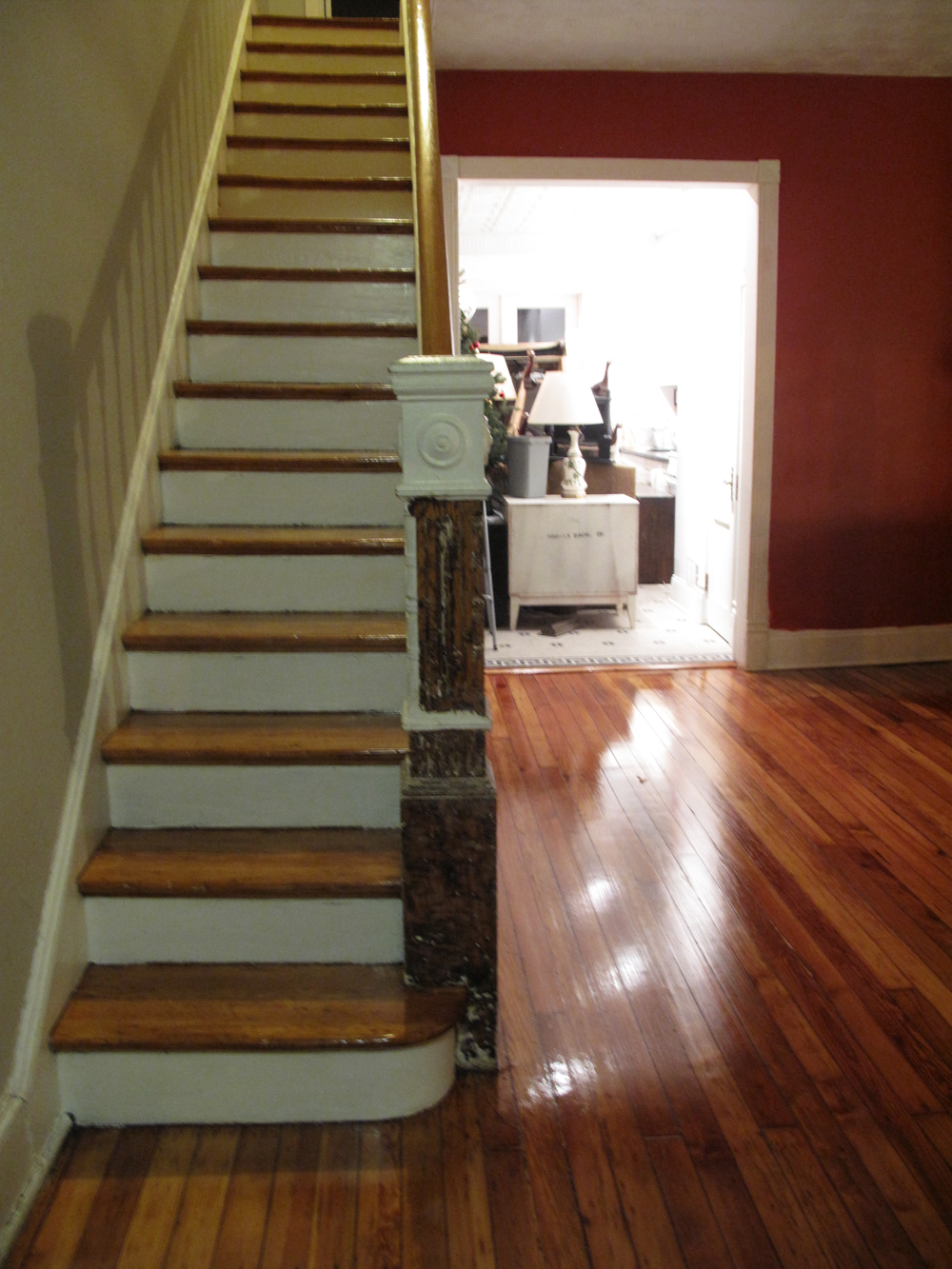 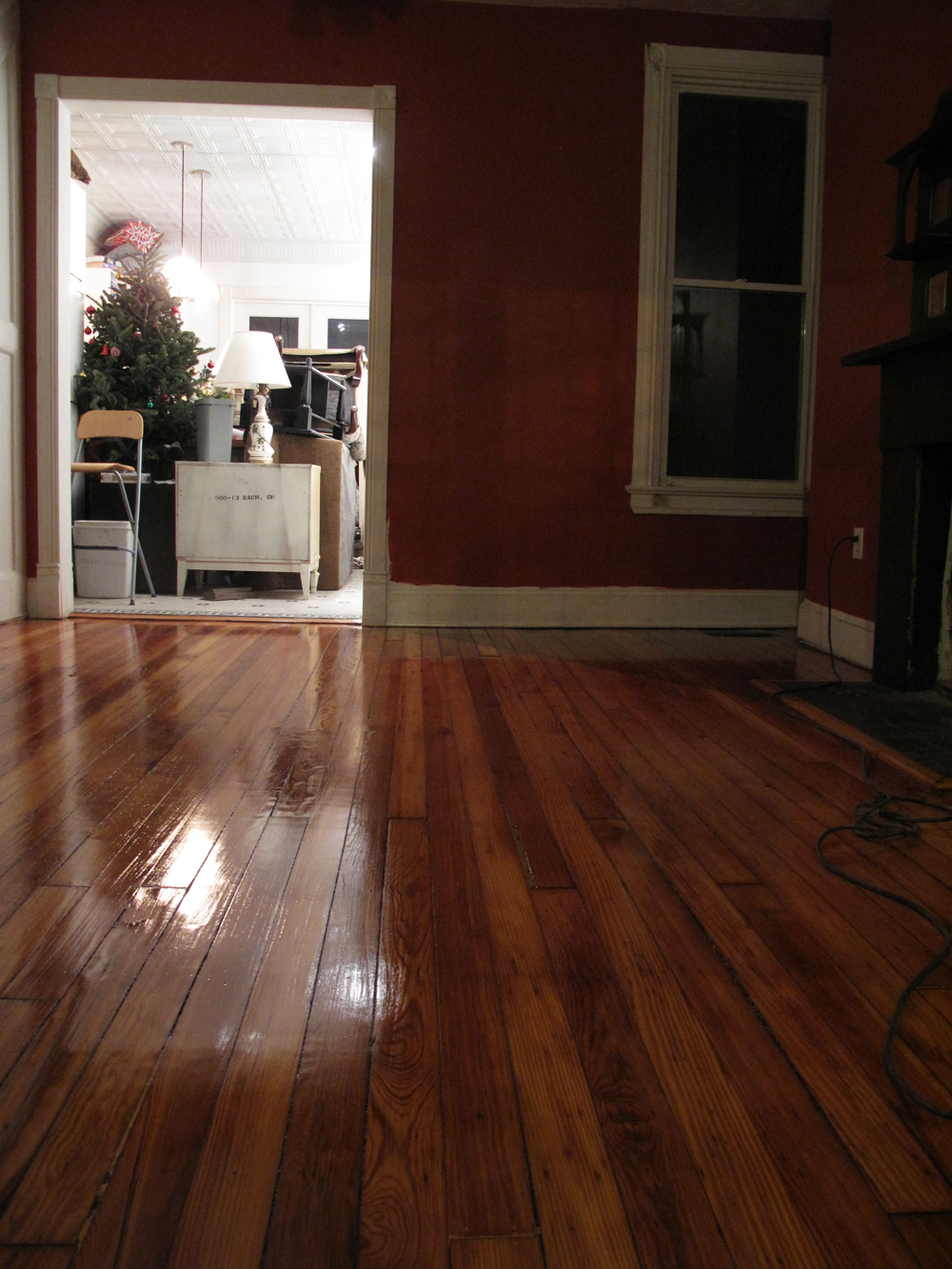 Although I am not excited to deal with this mess in the kitchen. *Otto has been loving this set up by the way – so much to explore!

One thing that I suppose is good from the exercise of removing all your furniture from the rooms is that it allows you to see them in a new light, maybe with a new lay out? I am thinking that this map will now stay in the kitchen, instead of returning to the living room. 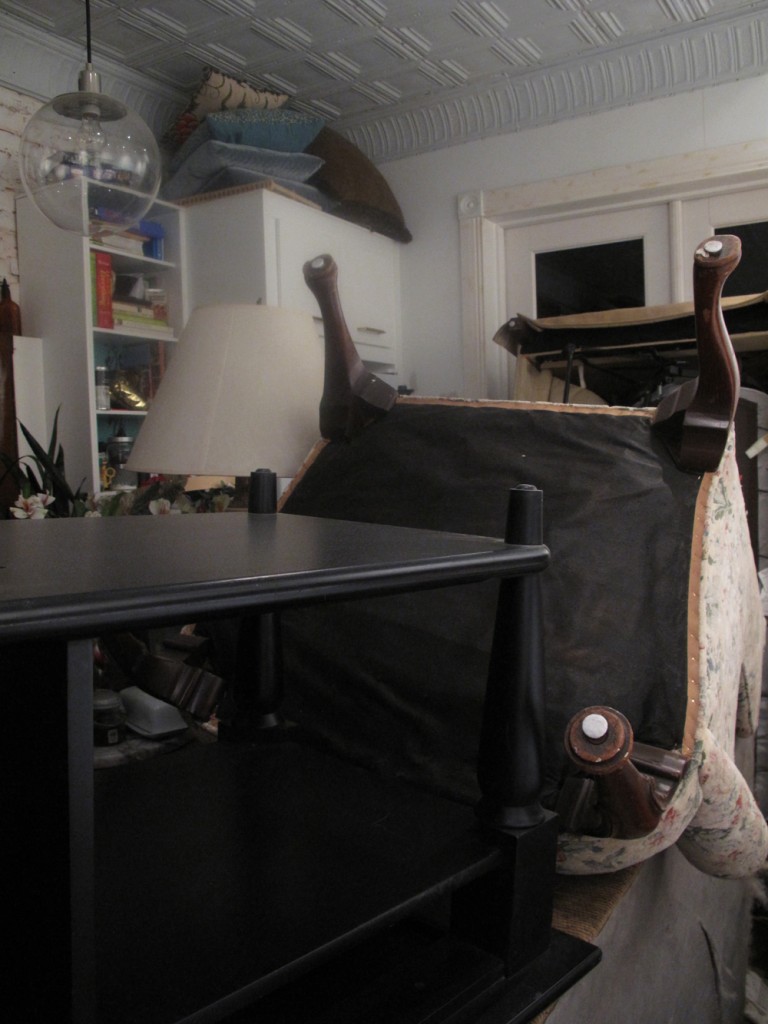 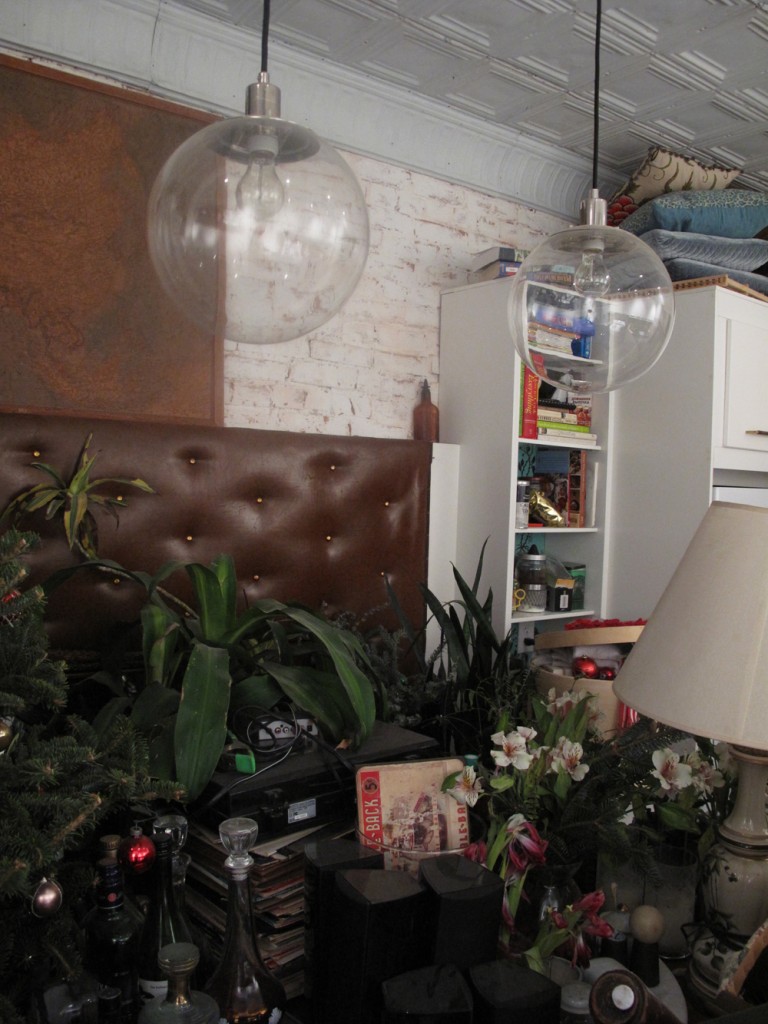