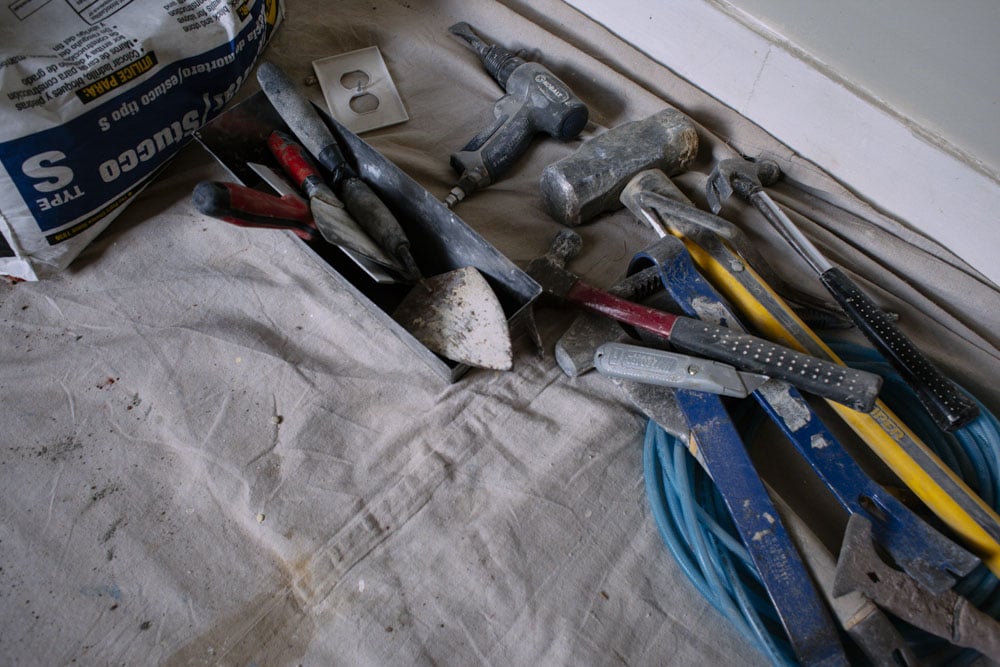 And so it begins. Actually, that is a bold face a lie – we are still quite a bit off from beginning of Phase III of VIB renovation, which is supposed to feature a full basement dig out. We did more or less sign off on the basement plans, and are now in the process of interviewing contractors for phase III. Once we settle on the candidate and price point, we will file permits (which require total budget number) and figure out how we will finance this massive undertaking.

In the mean time, we thought we would throw in a little project for old times sake:

We are gut renovating one of three VIB bedrooms. The smallest one actually.

It’s not totally out of the blue – we have been thinking that we might re-do the small guest bedroom at some point, but kept going back and forth on whether it would be worth the cost to justify it. There was nothing wrong with the room looks wise – just a small bedroom, with a good amount of light, new drywall, and even a neat exposed brick feature where the old chimney used to be. But while this bedroom was fine enough at first glance, and even in fact, fine enough for a guest to stay for a few days, it had one major flaw – temperature control.The small bedroom gets super hot / super cold during those 6 months of the year when DC climate isn’t “idyllic-temperate.”

If you look at the second floor plan, you can see that the small bedroom is located on the skinnier side of the house, i.e. the back part of the house that is not connected on either side to our next-door rowhouse neighbors. There’s also no insulation in that part of the house. As a result, the three wall sides are totally at the mercy of winds / weather, an effect that is compounded by a somewhat flimsy window, a rotting window frame, and brickwork that is overall in need of repointing from the inside. We were in denial about all of this for awhile. Last fall, motivated by this cold room and overall drafty house, we even signed up for an energy audit with DC Sustainable Energy Utility (DCSEU), which showed that our 1897 rowhouse was leaking air out of every possible (and probably not possible) nook and cranny. We proceeded to insulate and seal our attic, and seal our basement, which though pricey, made a big difference in how the house fared this winter. But, the small bedroom remained awfully, woefully cold. So, we finally decided to bite the bullet and just do it right: strip the drywall, take down the underlying plaster, repoint the brick, replace the crap window and rotting frame, add insulation, drywall, and skim coat with new plaster. And while we are at it, also take the opportunity to replace contractor-grade trim and baseboards which didn’t match the rest of the house (this is the only room in the house that was missing original molding).

Let me just back up quickly and talk insulation. We are no experts on the subject, and it appears that there is quite a bit of controversy when it comes to insulating brick walls. There is even more debate when it comes to turn of last century rowhouses with original brick. A good place to start reading on this is the Philadelphia Rowhouse Manual.

A lot of experts just advise against it – citing moisture permeability problems. We just couldn’t take that advice, because even after insulating and sealing the rest of the house, the small bedroom just wasn’t a comfortable room to be in. So, Sergey did hours of research, trying to figure out whether – in an old brick house like the VIB – insulated walls should have a water vapor barrier, or not. The Philadelphia rowhouse manual suggests that a water vapor barrier is necessary, various other builders say it’s only suggested by architects in theory and that in reality such vapor barrier might damage the house long term. To make all of this even more complicated, various wisdom is applicable in various climates.

In the end, we made game time decision: use 2″ XPS rigid foam board insulation – a semipermiable layer that allows the brick to “breathe” – without the water vapor barrier. Note to reader: this solution is applicable to climate Zone 4. The other part that sucks about insulation, is that it takes up a bunch of space: 2″ for the actual insulation, and another 1″ for furring strips and drywall. The room was already small to start of, so we sacrificed space in the name of comfort. But small is cozy, right?

Stay tuned for the finished product (fingers crossed contractor work is finished next week), budget breakdown and plans for future use for this room!