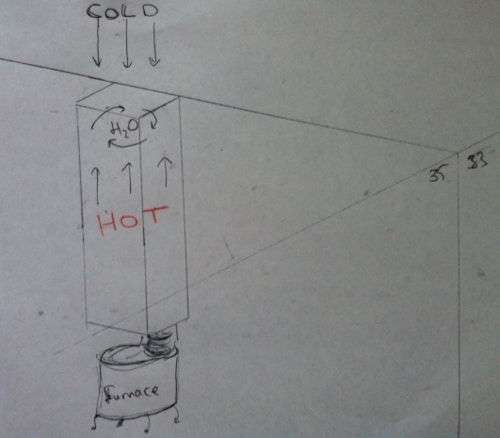 When we called the roofer, I was really not convinced that that much water managed to get through tiny cracks. and on top of that, we have seen very hard rains, while no active leaks were produced. but we were really hoping that a roofer would help us out with where the water was coming from.

So, I consulted PoP, and found Adam’s Roofing (no website). Adam, is, awesome. He checked out our roof, gave us maintenance advice (including on small cracks) and said that no water is coming from the roof– which *good news!* is in good shape–down into our walls. Adam checked out our neighbor’s roof as well, where he found…a covered up chimney!! this was the house that sent vacant for quite a bit (several years, we think) and someone finally moved in late last year.

So Adam’s theory: at the house next door, the hot air used to heat the house pushed up from the bottom and mixed with a cold air existing at the top levels of the house. Since chimney is covered, the mix produces condensation, which due to the mounting pressure needs somewhere to go, but through the walls. This is consistent with the assumption that all the damage has taken place during the cold months when the heat was on. And all of this turned out to be true – the house next door had no working chimney and moreover the old chimney had no liner. Our neighbor was in grave danger due to CO emissions. And the seller/ home inspector of that house is going to have some very bad karma coming their way. even if the seller/home inspector did not realize that roof / AC people did this – the negligence not to check out the job is just mind blowing.

so now we are working with the neighbor to figure out the next steps.

from what we *understand* for us this just means taking off the peeling paint (done) and waiting for several months before the wall dries out to repaint.